We hear about currency fluctuations and its possible impact on trade in the business news frequently.

Economic theory indicates that prices and consumption are linked. When prices are low, people usually buy more of a desired good than when prices are high. Part of a price includes the value of the currency with which it is purchased. For example, if the U.S. dollar is less expensive relative to the currency of the trading partner, that partner can use less of their money to purchase goods or services from the United States. Conversely, if the dollar is more expensive they must use more of their currency. (There are many articles published about this topic, including How the Dollar Impacts Commodity Prices.)

You can see this trend in the chart below. As a dollar can purchase more yuan, the U.S. balance of trade with China generally decreases. 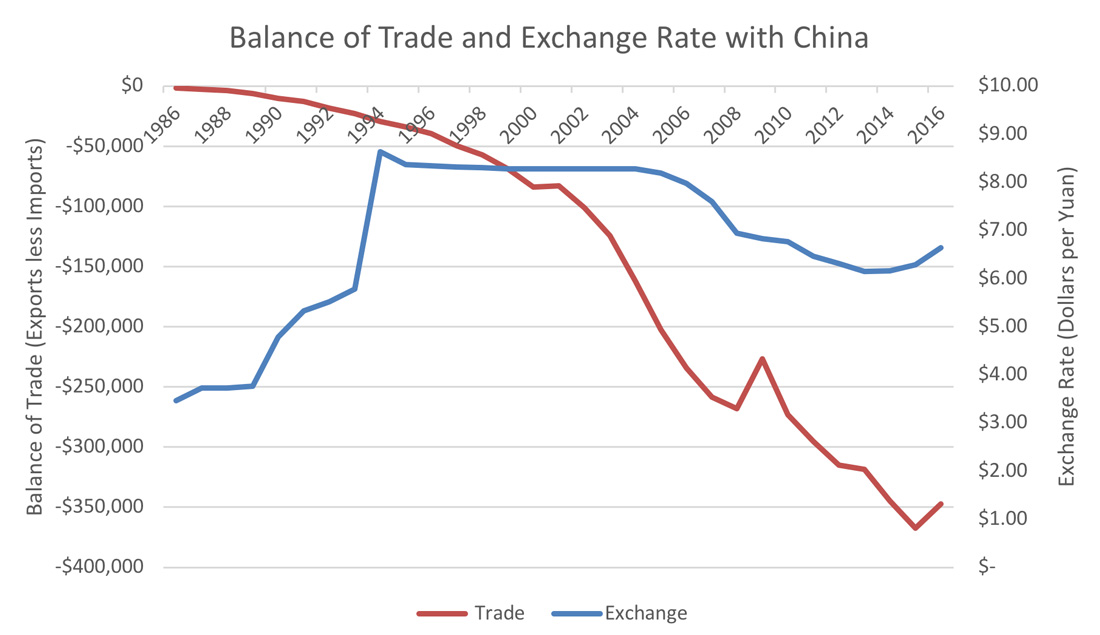 What's driving these changes? There are many drivers that influence rates, including monetary policy, economic growth, political stability, and inflation. But fundamentally it's supply and demand. Greater supply and/or lower demand corresponds with lower prices.

There are many factors that also influence sales and purchases of exporters and importers, as can be seen in the imperfect relationship between currency and balance of trade in the chart above. There are trade agreements, preferences of importers (such as preferring a specific brand or country of origin), product quality or availability, government subsidies, and any number of non-monetary factors.

Why does this matter to manufacturing of energy technologies? This is a frequently asked question in the context of trade flows, such as those presented in the CEMAC Benchmark report. We reported trade in U.S. dollars for consistency, but these figures mean different things to importers and exporters. If currency fluctuations increase supply chain costs then manufacturers may purchase inputs domestically or from different countries, increase prices for goods that they produce, or become less profitable. Increasing prices could also affect profitability when consumers purchase less of what is produced.

All these potential impacts show the complexity of both domestic and global economies, both in terms of trade and how trade affects value added from production.

As an example, a preliminary review of trade of polysilicon from 2009-2016 compared to the change in the strength of the U.S. dollar shows a trend that is similar to the economy as a whole as expected by currency dynamics, but not as completely if currency was a dominant factor. This time period was also influenced by complex interactions in trade policy, such as duties and countervailing duties, as well as rapid growth in both countries of solar photovoltaics, which use polysilicon in their manufacture. We plan to explore in more detail how the forces of currency exchange rates and trade policies can affect manufacturing.